May 26 Posted by Melissa in Salads and Sides 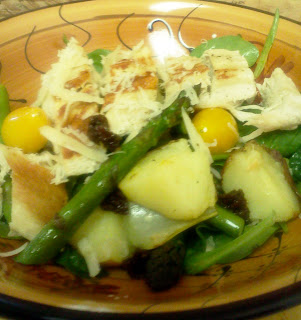 My garden is starting to produce!  Yay, go me!  Those cute little yellow balls in there are my homegrown pear tomatoes!

Preheat oven to 450. Fill one cookie sheet with potatoes, onions and 1-2 smashed garlic cloves.  Drizzle olive oil from sun-dried tomato jar onto veggies.  Pull out half of the sun-dried tomatoes, dice them up and throw them on there too.  Garlic salt and pepper to taste then toss to coat.  Bake for 15 minutes.
On another tray put asparagus, fresh tomatoes and remainder of smashed garlic cloves.  Do the same thing as before with the sun-dried tomatoes, drizzling veggies with the oil from the jar and adding rest tomatoes, diced,  followed by garlic salt and pepper.  Toss to coat.  Put in the oven with potatoes and bake for another half hour.
While that's cooking defrost chicken and butterfly cut (lay on cutting board and cut into chicken breast horizontally) Season with a salt and pepper then cook either in a skillet with a little olive oil or grill. Slice of chicken into strips.

When veggies are done cooking throw them all into a big bowl.  Add fresh spinach and toss gently until spinach begins to wilt.  Place chicken strips on top then grate the Parmesan over it all.

* "With the skin, one medium red potato (5.3 oz) contains 3g of dietary fiber per serving. That's the same amount of fiber found in many whole grain breads, pastas, and cereals. In addition to being beneficial to the digestive system, offering protection against colon cancer, and lowering cholesterol levels, fiber also gives potatoes their substance, helping you to feel fuller for longer.

Research shows that antioxidants help prevent and repair cell damage that has been linked to cancer and heart disease. While people typically think of fruits and berries as antioxidant rich, potatoes contain some of the highest anti-oxidant levels found in vegetables and rank in the top 20 most antioxidant-rich foods."

Read more: What Are the Benefits of Red Potatoes? | eHow.com http://www.ehow.com/list_6006685_benefits-red-potatoes_.html#ixzz1NTrX7IVU

*  Modern science has shown that garlic is a powerful natural antibiotic, albeit broad-spectrum rather than targeted. The bacteria in the body do not appear to evolve resistance to the garlic as they do to many modern pharmaceutical antibiotics. This means that its positive health benefits continue over time rather than helping to breed antibiotic resistant "superbugs".
Enjoy!
Tags side dish gluten free
PRINT